A DUBLIN, IRELAND PROPERTY GETS A SECOND CHANCE AT A FIRST IMPRESSION

Though Roisin Lafferty, creative director of Dublin, Ireland-based Kingston Lafferty Design (KLD), considers this project their most challenging to date, the end result shows no sign of its original condition. The setting of this mid-terrace, Georgian townhouse was ideal—Mountpleasant Square in Ranelagh, a leafy South Dublin city with a lovely village—the property was another story. Before the creative team could select finishes and paint colors, they had to address foundational issues. The structurally-unsound conservation project with highly restricted access had been neglected for years, which proved detrimental to its structural integrity. Extensive work was required to support the existing and proposed structures and to retain the neighboring properties. 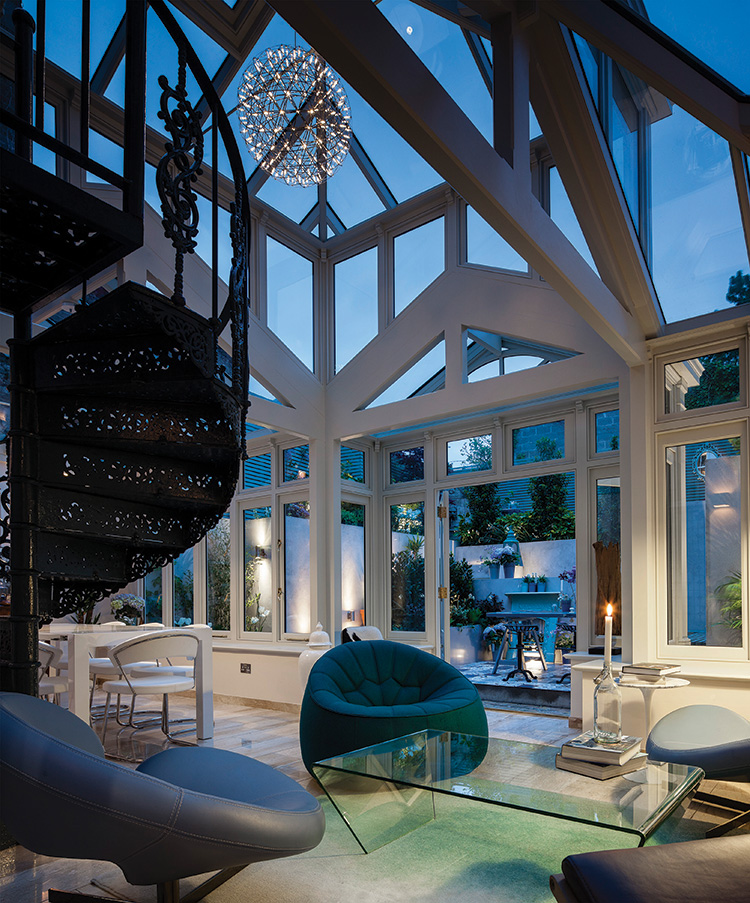 A colorful tile border adds a striking detail in this carefully restored basement that leads to a stunning garden beyond where an old door was made into a dining table for alfresco entertaining.

The goal was to strip and redesign the existing circa-1817 house with a large, double-height extension and a fully landscaped garden. “The main objective for the interiors was to maximize the space and direct as much natural light as possible into the existing property,” says Lafferty. “The entire basement was reduced to improve floor-to-ceiling height and the rear garden was extensively excavated to allow for the construction of a large conservatory extension.”

Because the property is fully conservation-protected, particular care was paid to the materials and construction. “For me, it was all about retaining the original character and history. And by keeping it more traditional, it was easier to get planning permission,” says Lafferty. “The challenge was to avoid pastiche, and to achieve the right balance between contemporary and traditional.”

A sleek, new basement kitchen features reflective surfaces to counteract the north-facing orientation of the garden. The lacquered cabinetry and waterfall island are complemented by Silestone worktops. A bespoke blue pantry wall of storage with cabinets in different depths conceals the angled wall behind them. Honed-limestone tile with under-floor heating was chosen for the basement, while the original floors remain in the living room and library.

Aesthetically, the 2,200-square-foot dwelling reflects the client’s eclectic style, paying homage to the original era while maintaining modern conveniences. Among the distinctive displays are a mix of old and new plates in the kitchen and old frames artfully arranged in other rooms. “We do some restaurant design and like taking ideas from commercial spaces and bringing them into the home,” says Lafferty. “Things tend to look better in clusters; even a set of IKEA frames will look stronger than one on its own.” 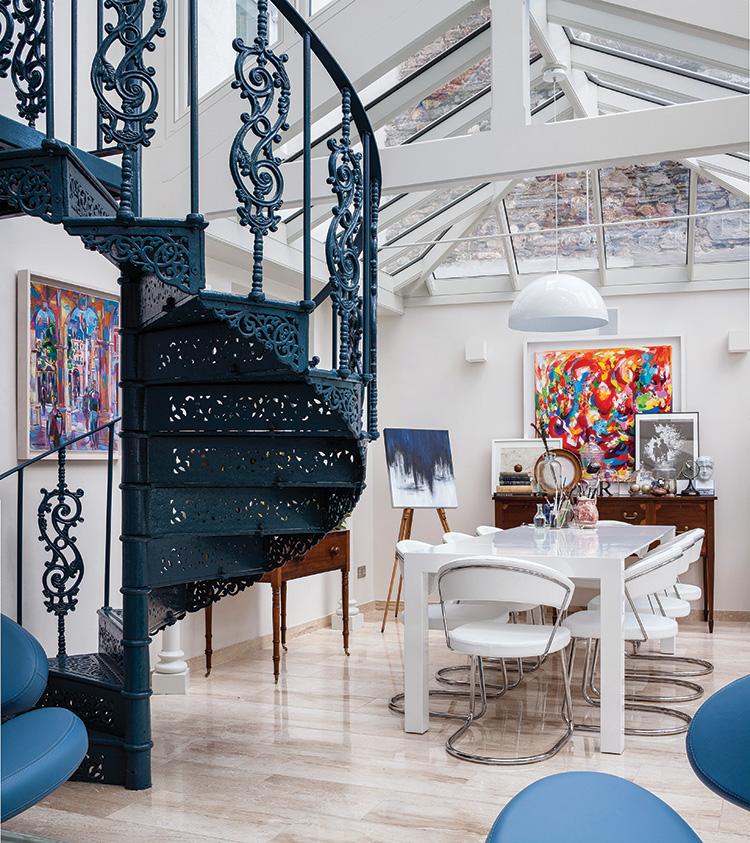 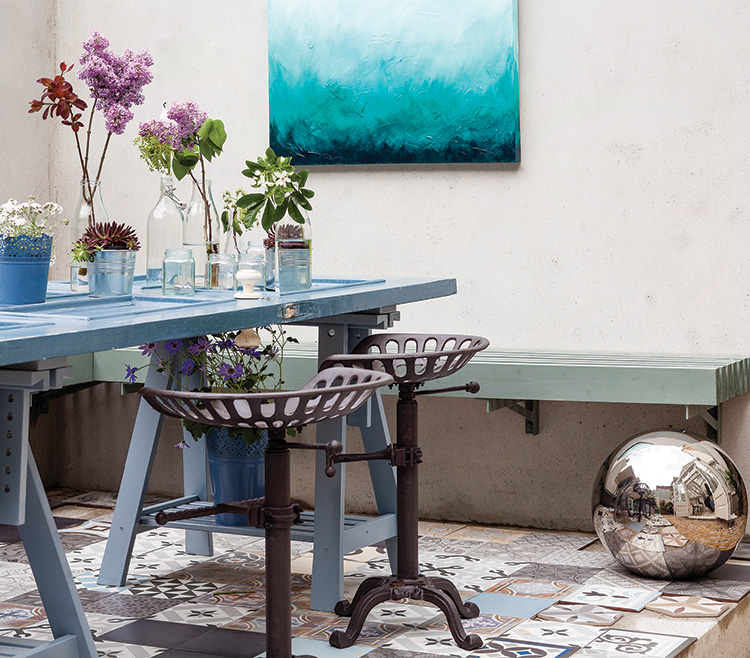 Unique furnishings include a coffee table from Roche Bobois in the mint-green paneled library. “It almost looks like a diamond,” says Lafferty who also loves the rug in the same room from Bluebellgray that ties the room together. As for lighting, she considers the Skygarden pendants by Marcel Wanders the real showstoppers. For Lafferty, effective lighting is key to a successful scheme. “I went for Tom Dixon’s [copper round pendant light] in the master bedroom. It radiates a lovely warm glow and is very relaxing,” she says. “Although the bedrooms have large windows, not a lot of natural light comes in. So, I went for a moody, atmospheric look in the master bedroom, and kept the other two bedrooms brighter.”

In the conservatory, the statement light is the Raimond by Moooi. By dividing the garden into three different levels, Lafferty created a large, light-filled extension that complemented the original style of the building. “The linear forms and raw materials create a contemporary space which juxtaposes beautifully within the period features of the original property and the traditional-style conservatory,” says Lafferty.

Salvage yards yielded such gems as the cast-iron spiral staircase in the conservatory extension, an old door that became an outdoor dining table, and a tree-surround bench that is now a coffee table in the living room.

The homeowners purchased the stained-glass panels in the kitchen and library at an antiques shop in Paris. “We teamed them with low-hanging pendants to add to the brasserie style, while mirrors were fixed to the wall behind the glass panels to add depth,” says Lafferty.

The once dark and dingy basement is now the bright and open hub of the home where the owners enjoy hosting their children and grandchildren. For Lafferty, it’s not just about the look, it’s about a lifestyle. “I always think about the experience the user is going to have,” she says. “A space needs to be fully functional as well as beautiful.”